Someone asked “What if Germany ran Detroit?” This kind of what-if-pigs-could-fly question mixes abstraction and specificity in a way that I do not find helpful. What works for me is iterating back and forth between two extremes — abstraction and radical specificity — and avoiding the middle.

Abstraction strips away distracting detail and can thereby reveal the underlying similarity between seemingly different entities. I use it to focus on the a concept that seems important and to look for opportunities for intellectual arbitrage.

The problem with abstraction is that it is easy to focus on a concept that is less important and to strip away details that point toward other concepts that could be more important. As a check, I use a switch to the other extreme, to radical specificity. Doing this lets me test any insight from abstract analysis by putting it to work in specific context where the details matter. If the abstraction is helpful there, I keep using it. If not, I look for some other abstraction.

An abstract analysis typically considers a small number of units (the nouns in any statement) and interactions (the verbs.) In economics, the firm is a familiar unit of analysis. The nation is another. I think of cities as units that fit in between these two.

In an abstract analysis, economists examine cases in which one firm takes over another. The analogous verb for cities is annex. In both contexts, we can ask whether it would be efficient to encourage such combinations. If so, we can ask next about governance mechanisms that could facilitate useful combinations.

Back to the specific. I learned from some friends in Singapore about the legal process there for selling a condominium apartment building. Back to abstraction: Condominium apartment building now shows up as a unit of analysis along side of the firm and next to the city. It is a private entity like a firm but with a voting procedure for a sale that requires support from a supermajority of owners.

Next, the discussion around the office at the Marron Institute pings around at the level of radical specificity. Solly Angel mentions a change in the law in Tel Aviv that succeeded in getting condominium apartment building associations to do seismic retrofits. It offers as an inducement the chance to add some additional units to a building that is updated. The key to the success of this law was the supermajority voting rule it established for making a decision about whether to do the retrofit and addition to a building. Like the provision in Singapore, it avoids the hold-up problem that arises when collective decisions require unanimous agreement.

Then Alain Bertaud notes the similarities between condo associations and the entities that are formed under the land pooling schemes, which have been used successfully to replace low-rise informal housing units with high rise-structures that allow both higher population density and more square feet of living space per person.

Then back to abstraction. These examples blend notions of the control rights implied by ownership of a “freehold” and the rights implied by the ownership of an equity share of a firm. The implied voting mechanisms can require unanimity, a supermajority, or a simple majority. Moreover, ownership rights (which entail specific types of voting rights) can be adjusted either by law or during a combination as when de facto owners of land in an informal settlement exchange these informal rights for equity shares in a larger entity.

Back to radical specificity. What fraction of all urban housing units in the entire world that are informal? What fraction is in multifamily structures? On behalf of UN Habitat, Solly is collecting data on a representative sample of 200 cites. Preliminary data from 170 of the cities suggest that worldwide, 14% (+/- 3%) of the urban housing stock is informal units, and 38% (+/- 4%) is in private, multifamily buildings.

The surprise is that another 14% (+/- 2%) is public housing, with its own governance structure. The “meme” about public housing is that it “never works (except in Singapore.)” I implicitly assumed that because it “does not work” it would have accounted for a single digit percentage of the total. In fact, it is as large quantitatively as informal housing.

Where does the conversation go from here? Who knows?

I don’t know if this helps explain how I use abstraction. I hope at least that it that it explains why I am so proud of the group we’ve been able to assemble at the Marron Institute; and why I love my job. 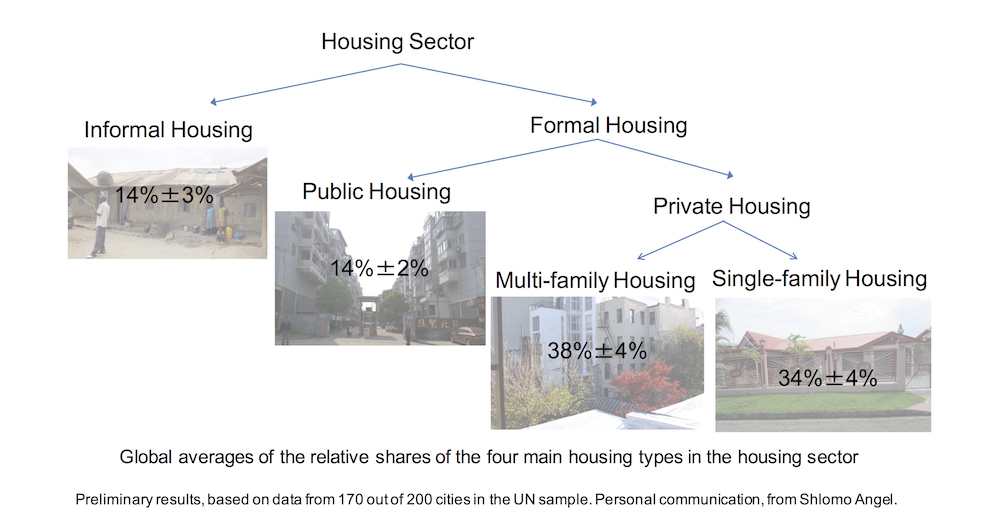