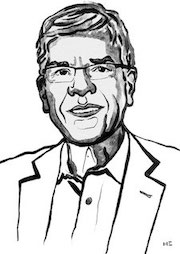 Answers to questions about by my proposal for a tax on targeted digital ads. (New FAQs added 9 am EDT on May 7.)

Today the FT published an Op-Ed featuring my recommendations for the new President of the World Bank. It’s reposted here with their permission. The original can be found here (paywall).

“As the World Bank’s board considers nominations for the institution’s next president (Donald Trump is expected to nominate David Malpass, the US Treasury department’s top official on international affairs), there are two critical ways he or she can make the bank more effective.

Nobel Lecture: On the possibility of progress

Many people ask why I received the Nobel Prize in Economics. Here’s the best answer I’ve come up with so far:

The human condition emerges from a never-ending contest between the dismal Malthusian economics of objects and the unrealized possibilities of the economics of ideas. For centuries, economists took sides and followed Thomas Malthus. A paper I published finally turned it into a fair fight. Economists no longer have to assume that Malthus wins before exploring the question posed by title I chose for my Nobel lecture: “On the possibility of progress.”

After all, a fact beats a theory every time, and the fact of human progress is hard to deny. The best available evidence about this fact comes from Bill Nordhaus's justly famous paper on the price of light. It is so convincing that I used it as the framing device for my Nobel lecture.

The Deep Structure of Economic Growth

When I was working on growth in the 1990s, I wrote an article on economic growth for an encyclopedia of economics. (The links in this post take you to a version of this article that I updated in 2016.) My goal was to provide an accessible introduction to our understanding of growth without shying away from its deep conceptual foundations.

The economic jargon for this first point is the "nonrivalry of knowledge;" the jargon from math and computer science for the second point is "combinatorial explosion."

I've been pleasantly surprised about how well this article seems to have served its dual purpose. Non-economists have said that it helped them understand why unlimited growth is possible in a world with finite resources. Professional colleagues have been intrigued by the discussion of combinatorial explosion and its interaction with nonrivalry. Specialists and non-specialists have both latched onto the concept it points to of a meta-idea: an idea about how better to discover ideas.

The updated version also makes a point that is not well understood that is captured in the picture to the right: If we treated Shenzhen as a city-state analogous to Singapore or Hong Kong, Shenzhen has the fastest rate of GDP growth ever observed. Over the 30 years from 1980 to 2010, output in Shenzen increased 1000 fold, which implies an average compound rate of growth that exceeds 20% per year.

In the summer of 2016, I discussed an important paper by Martin Stuermer and Gregor Schwerhoff at an academic meeting and wrote up a blog post that summarized the key points from my discussion. In light of decision to award a Nobel prize in economics for work on climate change and endogenous technological progress, I thought it would be helpful to go back to the issues I discussed there. In particular, I thought it might be useful to restate my stance of "conditional optimism," a term that has resonated for many. As I wrote back then:

This graph from the paper offers a key bit of evidence that supports conditional optimism. Despite seemingly ironclad economic theory that says that resource prices should rise over time, they have refused to cooperate with models that ignore the power of induced technological change.