There is more to the Gender Gap than the Partisan Divide

A recent post at fivethirtyeight.com reaches a conclusion that is plainly false. This is no doubt an honest mistake caused by some mixture of haste, confirmation bias, and careless overstatment. There is no reason to suspect any conscious intent to mislead; no justification for ad hominem attacks on the author.

What matters are the facts. The facts here bear on profoundly important personal experiences and equally important collective decisions. It would be inexcusable to let false statements about such facts go unchallenged or to let false claims divert attention from the question that matters: “Is the gender gap on questions about sexual harassment and assault a sign that women have a better grasp on the facts?”

The title of the post summarizes the first step in its argument:

It justifies this claim using responses to a question (#9) from a recent HuffPost/YouGov poll, which asks whether the allegation of sexual assault against Brett Kavanaugh is credible. For this question, the difference between the average response of Democrats and Republicans is larger than the difference between the average response for men and women.

The best one can say about this comparison is that it is careless. Its measure of the partisan divide suffers from an obvious upward bias relative to the measure of the gender gap because it excludes the responses of independents. Leaving out these centrists will automatically increase the difference between the two groups that remain. The effect is big because there are lots of independents. For this particular poll and in round numbers, 600 of the 1500 respondents do not provide a party affiliation. (The second table below has the details.)

The post crosses over from assertions that are careless to ones that are false when it generalizes:

“… this pattern — a bigger split by party than by gender — is not just seen in heavily partisan situations, …”

“Even on gender issues more broadly, the partisan divide outstretches the gender one.”

The conclusion of the post, stated in the second quoted sentence, is objectively false.

Another question from the same poll, #46, shows that it is false. It refers to general “cases of alleged sexual asset” and solicits a choice: “Is it more important to protect the rights of the accused or the rights of the victim?” The answers reveal a gender gap that is substantially bigger than a measure of the partisan divide that includes the independents, bigger even than the measure of the divide that excludes them.

It will come as no surprise that a larger fraction of men than women say that it is more important to protect the rights of the accused. The first line of the first table below shows that 21% of men select this respond versus 8% of women. 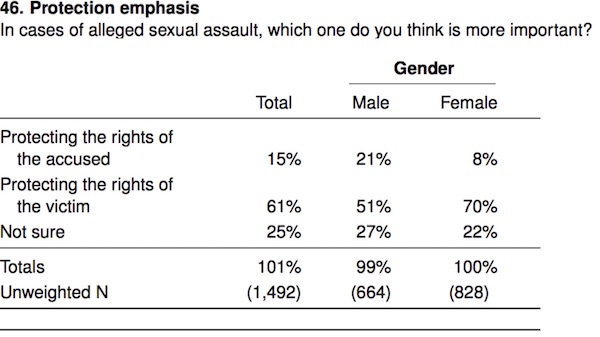 The first line of the next table shows that Republicans are also more likely than Democrats to prioritize the rights of the accused (20% for Republicans versus 11% for Democrats.) This 9 percentage point difference is already smaller than the 13 percentage point gender gap. Moreover, as expected, the value for the excluded independents (14%) lies between the values for the two parties.

To be comparable with the gender gap, a measure of the partisan divide must take the difference between two groups that include everyone. A natural way to do this is to divide up the independents and group them with one party or the other to end up with R and D leaning halves of the sample with same number of respondents (746). For each, the percentage of respondents who prioritize the rights of the accused is a weighted average of the percentage for its party and the 14% value for the independents, with weights that are proportional to the shares of the party members and the independents.

The numbers to the right on the first line of second table show by how much this measure pulls the values for the two parties toward the 14% value for the independents. There are still more in the R half than the D half (17% versus 12%), but now the partisan divide is 5 percentage points, down from 9 for the measure that excludes the independents.