Making Room for Whom?

The people who work in the global-development-consulting-complex seem to develop a hard-wired commitment to the containment paradigm: governments should contain the size of cities. This means that governments are supposed to create an artificial scarcity of urban land. It is then an arithmetic inevitability that vast numbers of people are needlessly deprived of access to the formal housing market.

Solly Angel, who leads the Urban Expansion project at NYU, describes our alternative approach as the making room paradigm: governments should make room for all people who want to move to cities. 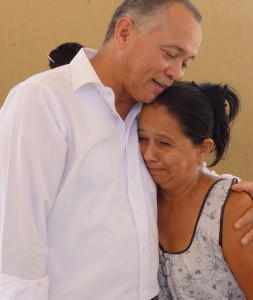 Today, when I was visiting some housing that the city of Valledupar, Colombia had built for families displaced by the violence there, Mayor Socarras introduced me to Maria, whose son was disappeared five years ago, at a time when the FARC and the paramilitaries were both active in the region. I took this picture as he comforted her after she was overcome with the emotion of telling her story.

After she moved to Valledupar to escape the violence of the conflict, she, like tens of thousands of people in the same situation, lived in an illegal squatter settlements. This was her only option because the advocates of containment have succeeded in creating the artificial scarcity of urban land that they seek.

Several years ago, the national government in Colombia offered to pay for housing for displaced families. When Mayor Socarras tried to use these funds to build housing, he faced the same problem that each family had faced as their own. The artificial scarcity had driven up the price of land on which it was legal to build a residence.

He was not alone. Throughout Colombia, mayors could not acquire land where they could build the housing that the national government was willing to pay for.

Her story turned out well. Mayor Socarras found a way for Valledupar to make room for her to live legally, in a spot where she no longer had to be marginalized, no longer had to live in fear of being displaced again.

The goal of the making room paradigm is to ensure that there is enough formal urban area to be sure that everyone who wants to live in a city can do so without being forced to break the law.

Note added Aug. 31: I confirmed Maria’s name, which I have added. Through an intermediary, she also clarified that she has no idea who was responsible for the disappearance of her son, so I edited the post to capture this uncertainty.

Part of what is hard for Maria is that she still knows nothing about what happened to her son. The specific reason why she was so appreciative of the Mayor on Saturday is that on after a previous visit, he had helped her get in touch with a support group of women who had been living with this same lack of closure.