Two opposing interpretations of the evidence about waning vaccine protection are grounded in two very different models of the course of a Covid-19 infection. In two masterful tweets, John Burn-Murdoch captured and named them: the dice model and the two-walls model.

Under the dice model, waning protection against infection implies waning protection against severe disease. Because there are fewer instances of more serious outcomes, it is more difficult to tease out statistically significant evidence of waning against a more serious outcome than against infection. But if the dice model is right, the two always go together.

Under the two-walls model, it would be possible to have waning protection for infections without waning protection for severe disease, but there is a problem with this model. Part of the beauty of the stripped-down characterization by Burn-Murdoch is that it is precise enough to surface its intrinsic logical contradiction. There is a way to patch the model to remove this contradiction, but what remains is a biologically implausible model that is starkly inconsistent with the data.

Because Burn-Mudoch’s charicatures are so pithy and memorable, they are worth quoting verbatim: Model 1?

Under the model with two-walls, the virus may breach the first wall and cause more infections with no effect on the number of people who get severe disease because there is a second wall that prevents any of the additional infections from becoming severe.

In a large group with given characteristics, let ||I|| represent the number of people who get infected and let ||S|| be the number who get severe disease. Before we know what happens, we can put a tilde over each letter to show that ||\tilde{I}|| and ||\tilde{S}|| are random variables characterized by a joint probability distribution. Once we know the number of infections, ||I|| is a number. Given that value for ||I||, we have a conditional distribution of the random variable ||\tilde{S}|| for the given value ||I||.

The dice model recognizes that there is a sequence to these events. It starts with a random process that determines the number of people ||I|| who get infected. For each of these people, there is some probability ||p|| that their infection will develop into serious disease. The value of ||p|| will vary across members of the group. Conditional on being infected, someone who is older or who has other health problems will have a higher probability of developing severe disease. But as long as ||p|| is greater than zero for each individual – that is, as long as there any chance that each infection can develop into severe disease – each additional person who is infected increases the expected number of cases of severe disease.

3. Why the Difference Between the Two Models Matters

From a number of different studies, a large body of evidence has emerged that the protection the Pfizer vaccine offers against infection is falling. Under similar conditions, a larger fraction of the more people who are double-vaccinated with Pfizer are getting infected now.

It is harder to measure what is happening to the protection that the Pfizer vaccine offers against severe disease, so policy discussions are forced to rely on a model to answer an “if .. then” question: “If ||I|| increases, what happens to ||\bar{S}||?”

4. The Two-Walls Model Is Logically Incoherent

This means that in any group, $$S < I$$ As a result, the value of ||I|| tells us something about the possible values for ||S||. If ||I|| is a very small number, then ||S|| must be as small or smaller. This means that the assumption that ||S|| and ||I|| are independent random variables contradicts the very definitions of these variables.

5. The Modified Version of the Two-Walls Model is Inconsistent with the Data

There is a modified version of the Walls model that can still yield the prediction that in some circumstances, more infections does not mean more cases of severe disease. 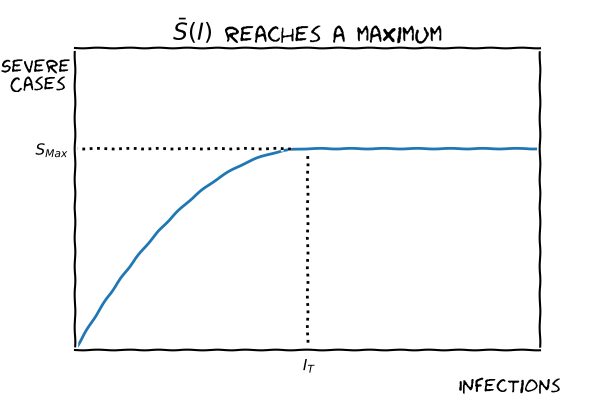 But the more serious problem with this version of the two-walls model is that is no evidence that supports a maximum value ||S_{Max}||. In every case where we have seen a big change in the number of infections, we have also seen a change in the same direction in the number of hospitalizations, cases of severe disease, and deaths.

Given its logical and empirical inadequacies, it is hard to understand why a regulatory decision about who is legally allowed to receive a third dose of a vaccine could hinge on the argument that the two-walls model is, nevertheless, the right model to use to interpret the available data on the changing protection offered by vaccines.