Is Detroit Denser than Denver?

The population of the city of Detroit has fallen from 1.8 million in 1950 to about 714,000 in 2010. Could it be possible that after this decrease, Detroit is still more dense than Denver? Using US Census data from 2010, it appears that it is: 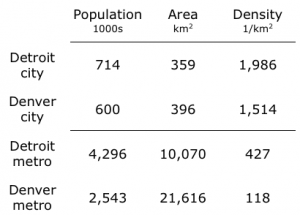 My colleague Alain Bertaud says that any time someone reports a density for a city, they should show the map. This comparison nicely illustrates his point about why the maps are so informative. A quick look at the map of the Denver area shows that there is something wrong with both of the density measures reported in this table. 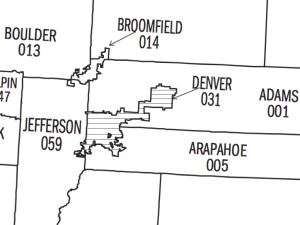 The city, shown on the map above as the area with solid horizontal lines, has an odd dumbbell shape, with a large area in the northeast that is only tenuously connected to the rest of the city. This is land that Denver annexed to build a new airport. At 140 km sq, Denver International is the largest airport in the United States. It accounts for more than one-third of the land area of the city. In contrast, the only airport inside the city limits in Detroit is Coleman A. Young International Airport, and it takes up only 1 km sq. (The much larger Wayne County Airport, 29 km sq, is outside the city boundaries.) 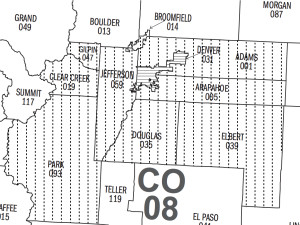 The next map zooms out and uses vertical dashed lines to show the counties that are added to the city of Denver to create the Denver-Aurora metropolitan area. This way of constructing metropolitan areas out of entire counties biases the comparison with Detroit because counties in the western US tend to be large and sparsely settled. For example, the metropolitan area for Denver includes Park County, presumably because it has a small corner in its Northeast from which people commute into the city of Denver. Park County has about 16,000 residents living on its 5,700 km sq of land, which implies a density of about 3 per km sq. Including this county, and the largely rural counties to the east of Denver, substantially lowers the reported density for the metro area.

Fortunately, the Census Bureau has also defined a concept that it calls an urbanized area. In rough terms, these areas that extend out from a city center to contiguous land with a population density of at least 1000 people per square mile or 386 per km2. As it should, the map for Denver shows that the airport is not part of the urbanized area and neither is any part of Park County. (The corresponding map for Detroit is available here from the Census Bureau.) 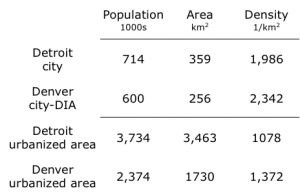 As this second table shows, density is higher for the city of Denver if we subtract the area for the airport. It is also higher if we compare the two urbanized areas.

So the right answer to the question posed in the title is no, Detroit is not denser than Denver, but you might not reach this conclusion unless you check the maps that show the areas used in familiar density calculations.